I am a believer that insider trading exists and that the “smart money” has access to privileged information when it comes to company’s data, such as earnings. I mean, do we really think Yahoo Finance gets the same info on the same timeline as Goldman?

If you study price action like I do, you begin to see patterns where odds begin to favor a particular outcome. I hear a lot of talk that “you can’t game earnings” or “it’s a completely random event”. While there is a certain degree of randomness in any market situation, I do think it is possible to “game” earnings reports with better than 50/50 probability (and I do know successful traders who do so).

If my theory is accurate and Smart-Money investors are privy to exceptional information ahead of the general public, we should be able to glimpse their behavior ahead of a market moving event. As the saying goes, “the majority of surprises tend to occur in the direction of the dominant trend”. Of course not all surprises follow this thesis, but overall more than 50% do in my experience.

An example of this is occurring right now after-hours with initial earnings reactions to Nike (NKE) and Micron (MU).

I am in the camp that Big Money is right more often than not and they will telegraph their moves to those who are watching. I always watch how a stock trades about 6-weeks or so ahead of earnings 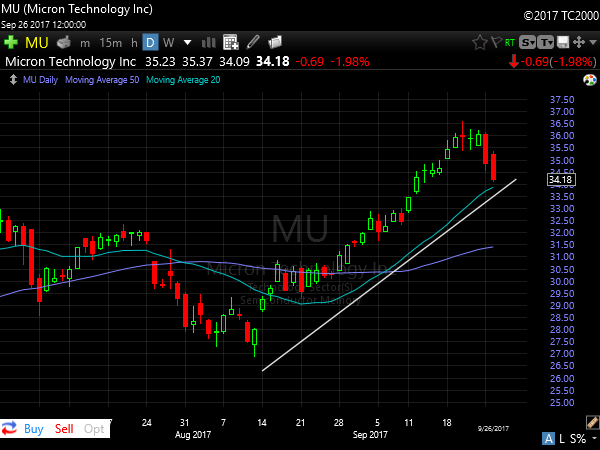 Notice the trend into the earnings report? Major buyers have been bidding the stock higher in anticipation of a strong result for the last quarter. Did they have exceptional information? I don’t know. But what I do know is that they were right to do so as MU is trading higher by +3% on their initial reaction following the report.

Contrast this look with Nike over a similar period; they too announced earnings after the close today: 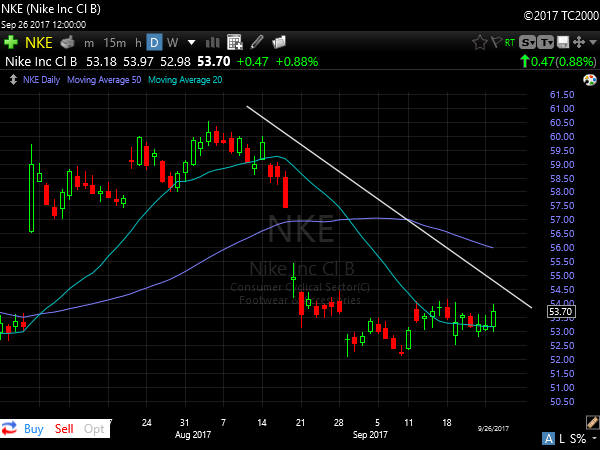 Nike is currently trading lower by -4% after-hours following their report.

Now, this could all be coincidence that MU trading in an uptrend while Nike traded in a downtrend ahead of the report, but I have seen this happen too many times to count to think there is nothing to it. I would conclude that investors where accumulating shares of MU for a reason and likewise distributing shares of NKE.

We can also point to examples where this wasn’t the case, again this isn’t right 100% of the time. But overall if we are watching the price action we will see patterns like this occur for a better than 50/50 outcome.

There is another pattern that emerges leading into an earnings event that can be a powerful risk reward; Looking at SQ as an example of how price will consolidate orderly ahead of an earnings report within an overall uptrend. 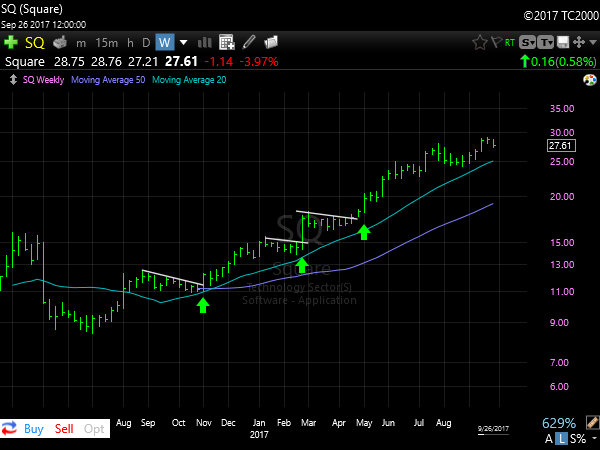 When a pattern persists like this with a series of rallies and tight consolidations, it is a sign of lack of investor interest in selling. The orderly pullbacks show tight supply and suggest the Smart Money is happy to hold their shares for more upside to follow.

If we watch for the behavior of the largest investors we can get hints as to their overall knowledge and expectations. Since they are the “Smart Money” they tend to get it right more often than not, and ultimately that is what this game is all about.