For several months now we have been long ABBV in monthly basis accounts. March provided the initial signal and then June followed through to new highs. 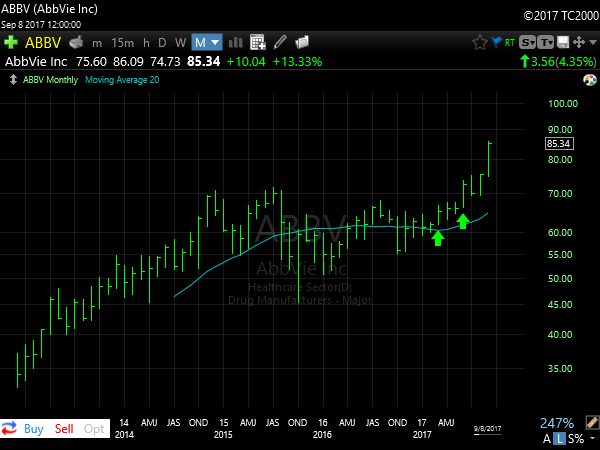 Both of these signals came off of bullish consolidation patterns and Inside/Up triggers off the prior month's tight range. Most importantly, the overall base structure here is what was so attractive to me.

Following the 2-year rally beginning with the Abbott Labs spin-off, the stock churned sideways for another 2-years. The action began to tighten considerably near the 20 Month SMA in early 2017, just before this recent leg higher began.

Once I establish a position in a strong long-term chart, I will begin to look for opportunities on the Weekly timeframe to add shares for a more aggressive trade. 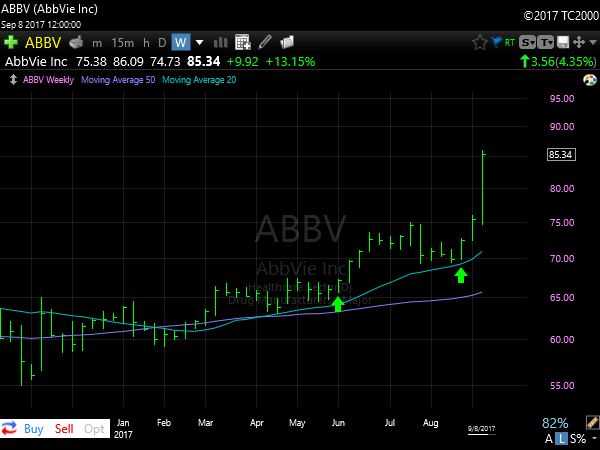 The Weekly signal to kick off June was a combined Inside/Up pattern on both the monthly and weekly timeframes, this was the aggressive add spot for us. Price then rallied nicely for 6-weeks, pulled back in mid-August, and then kicked off again from a new Bull Flag pattern. This second signal was another spot to trail stops and add again.

The last two weeks have been vertical, trading higher more than +17%. Due to the series of very strong risk/reward entries we had quite an overweight position by late August. This surge has taken the stock into a notable level based on the monthly pattern that I feel warrants reducing some exposure, re-balancing the trade a bit. 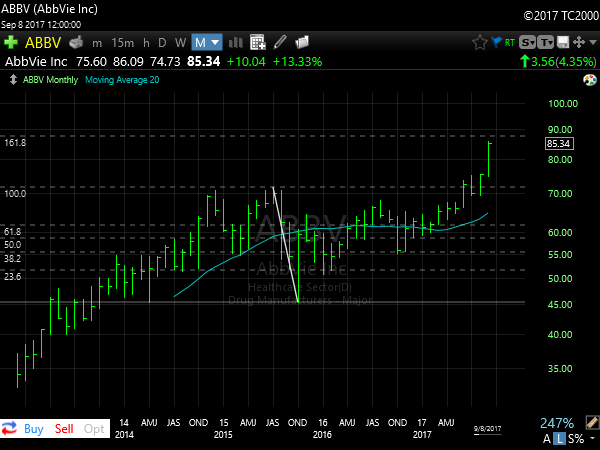 As price approaches this 161.8 extension level, and due to our significant overweight holding, plus the vertical price action, I reduced some exposure (1/3) on Friday.

Price has extended substantially over the past few months and a consolidation would not be unexpected. Should that play out we will look for new opportunities to add back exposure in the right situation or continue to run our current holding should the stock rally further.

Based on the big picture look in ABBV I do not think this move is over at all and I intend to stay bullish until proven wrong. I have found great success following large base patterns over the years and this one seems like no exception.

If you are interested in receiving our live Weekly/Monthly trade alerts and being part of the ZenTrends Trading community please reach out to me on social media @ZenTrends. We are excited to announce that our expanded service offering will be available in the next few weeks.