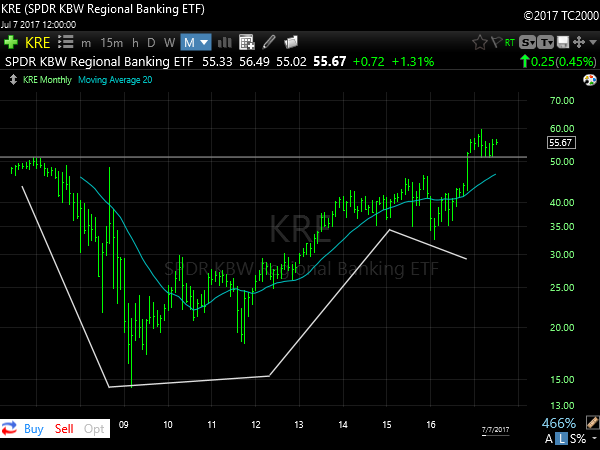 In November of last year KRE emerged from a 10-year base following its inception in 2006. This is the equivalent of a "post-IPO" base for a newly issued equity. The recent breakout above the prior high from 2006 is what has my attention here.

The base has formed a decade-long Cup/Handle pattern that is currently in motion. November's breakout kicked off the pattern and since we have seen price consolidate sideways, all the while holding above that 2006 high.

This is a huge pattern and these don't resolve overnight or over the course of a few weeks. Often the length of rally will resemble the length of base its emerging from. It is not impossible we could only be 7-months into a 10-year bull market for Regional Banking stocks.

For this analysis to be invalidated price would need to trade below the November 2016 low. 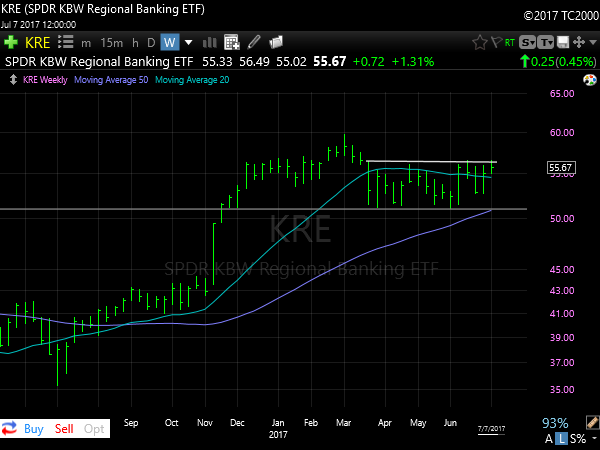 The Weekly shows a closer look at the 7-month breakout consolidation. Participants got quite negative in March and then again in May when there was a lot of discussion that KRE was forming a Head/Shoulder Top. As with any price pattern, nothing is confirmed until price breaks down through key support. In this case the support from those prior highs in 2006 was never violated and price has since reversed back higher and is pressing against a significant resistance level.

A breakdown below the $51 support would become more problematic for the intermediate-term trend. Above that however the setup remains very constructive. 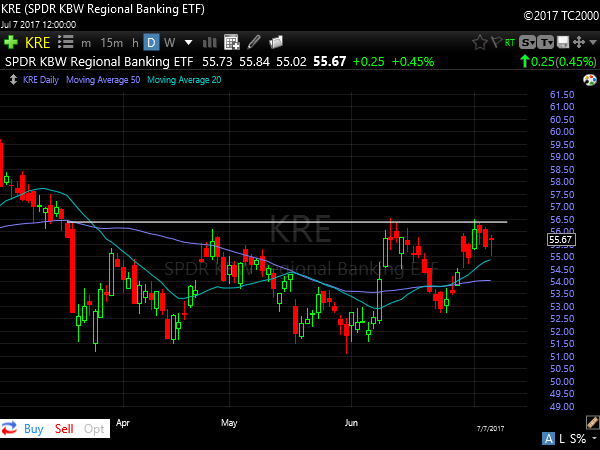 The Daily chart looks very positive to me as well. Price continues to press against the $56.50 resistance. Once the range from 3/21 is overcome it should be a quick shot to the prior highs near $60.

Due to the size of the overall pattern on the larger timeframes, this range breakout could be the launchpad to reignite the prior trend. 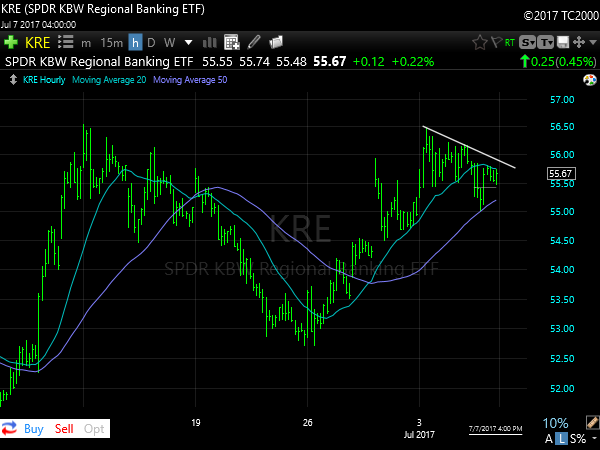 Zooming in on the Hourly chart the trend is in firm position. The past 4-weeks have formed a Cup/Handle pattern and recently a bull flag into the rising 50 SMA. A move over about $56 would kick off this shorter-term pattern.

When viewing Regional Banks on multiple timeframes it appears to me that they are all suggesting the same thing. Patterns don't always play out but they give us an indication of the market's intentions and a way to measure risk.

From my view it looks like these Banks want to push higher, until price suggests otherwise I will continue to put money to work as the patterns suggest.