This idea has just recently occurred to me, should Amazon buy Tesla? They seem to making headways into every aspect of our lives, why not energy generation and electric cars too?

Likely the most upside could come from merging their space programs, Blue Origin and SpaceX. A joining of Elon Musk and Jeff Bezos could reshape technology in a completely new direction.

What kind of growth premium could space exploration demand? Think of the possibilities in travel, colonization, etc.

I saw a stat last week on Twitter showing AMZN gaining $20B in market cap since the Whole Foods acquisition, and therefore paying for the deal 1.5x already. What an interesting purchase..

Probably the most accessible and immediate application would be Alexa in your car. Imagine the scenario of leaving the office, climbing into your Tesla and your wife calls saying we need a few things from the store. You say: "Alexa, I need Peanut Butter, Milk, Bread, and 1lb of Hamburger". You drive to your newest Whole Foods, pull up outside the entrance, and an employee delivers the groceries to your vehicle. No need to pay either because your Prime account has already been billed.

What Tesla needs is funding, Amazon could provide all the capital they would ever need. Tesla offers the most brilliant engineering minds in the world. Intellectual property meets unlimited capital.

As far as the stocks are concerned both continue to trade near their all-time highs and are in strong position going forward as growth leaders.

Tesla's stock has just thrown back to retest a 3-year horizontal resistance level. It appears TSLA is beginning a new secular breakout. 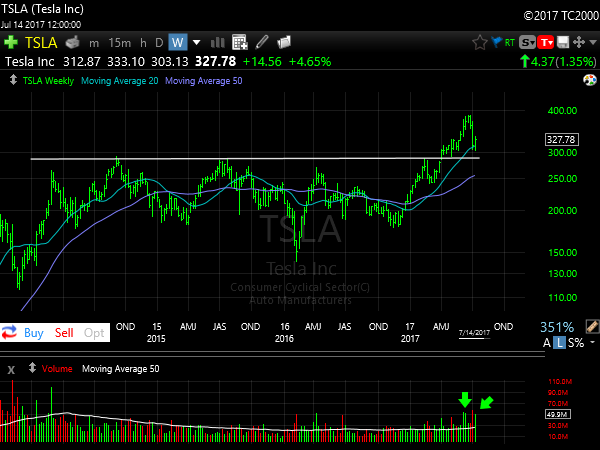 I think Goldman has been doing some buying...I'll put it this way, they don't make downgrades to prove how smart they are to us lowly retail investors. They want to accumulate positions...Just a hunch ;)

This doesn't even have to be a full takeover, though I don't see the regulators having too much conflict in such an event. But in my view it appears to be a match made for a possible future merger. 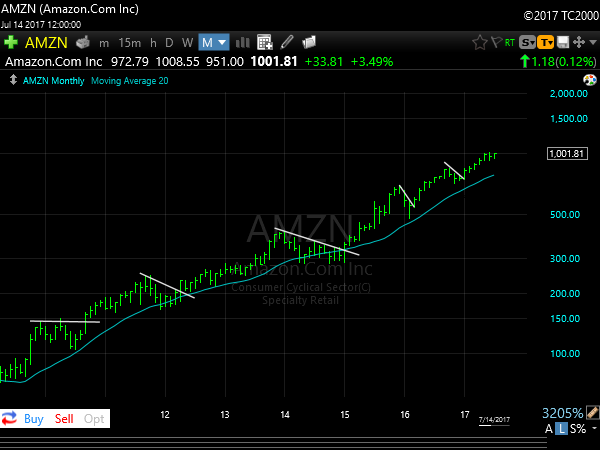 I am sure there are those much smarter than myself who could offer plenty of additional reasons why this should or should not be done, I simply find it intriguing from a technology and diversification standpoint. Whether it ever happens or not I have no idea, but the possibilities from such a merge could absolutely change the way we live.