Some Miscellaneous Charts at the Close of Q2

Whether you trade long-term charts or not I feel it is very important to keep perspective on the larger timeframe to best understand the market you are trading. We want to be aligned with the dominant trends. Knowing these larger perspectives can also guide us to building a bigger thesis on how we want to position funds or focus on opportunities going forward.

I spend a lot of time looking at and positioning with Monthly charts. Even taking some time to look at Quarterly charts can give us a viewpoint that is simply hidden to most participants. I believe there is great value in looking where others will not. Zooming out to view the forest instead of obsessing over the trees is something I take very seriously. 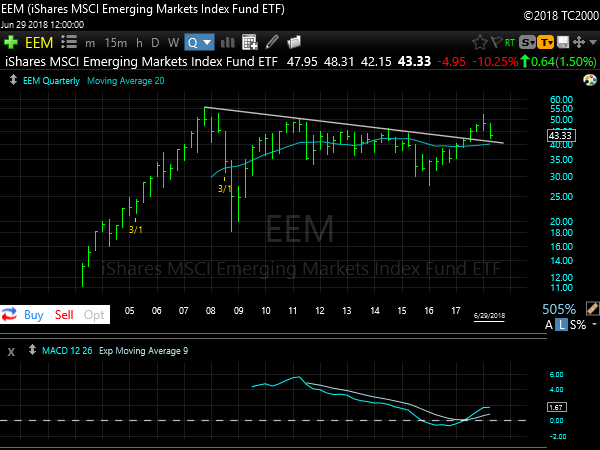 Emerging Markets have been taking a lot of heat in the media lately, but I think they are the most interesting that they have been in the last decade right here.

After ripping for the last 2-years off the 2016 low, price has now retraced to the downtrend breakout line and approaching the now rising 20 Quarter SMA.

This group has been an absolute mess for a decade and I have had no interest in getting involved. The only opportunities they has offered have come from 2 vertical runs off of price crashes, not exactly ideal for a trend following strategy. In fact the return would be zero had you just held this from early 2007.

However it looks like the character is changing here: momentum is rounding up after a move back to the Zero-line and price is retesting multi-year breakout resistance going back to 2012. 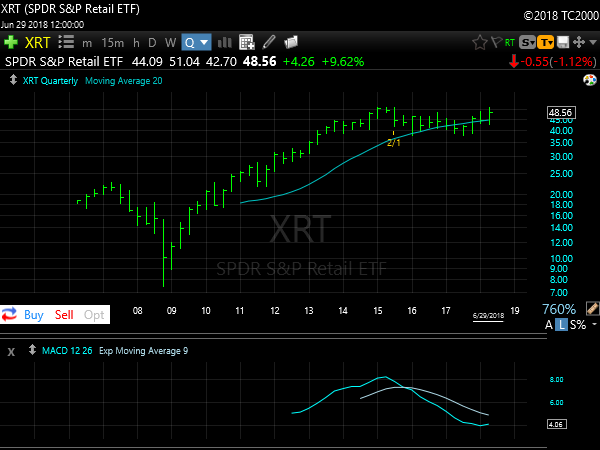 Retail stocks have been the whipping-boy of many trading discussions over the past couple years. The overarching reasoning is that AMZN is simply killing the entire retail industry. For our purposes we should note that AMZN is actually in the XRT, so that helps.

But overall the so called demise of the Retail sector seems greatly exaggerated and concocted by those who can't see further out than 1-year of price history. Certainly they have underperformed during this latest bull run, however the long-term view looks to be setting up after having rested in a very orderly manner.

To me all this looks like is a 3-year consolidation at all-time highs after a 6-year run from $7 up to $50. It looks quite normal to me and I would expect the trend to resume in the prior direction once this rest period comes to an end (which appears to be sooner rather than later).

This is a group I want on my radar going forward and will be open to building positions as opportunities arise. 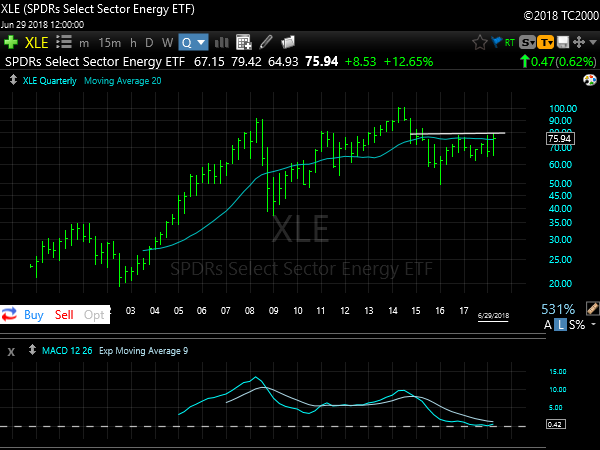 Energy has the look of a very coiled chart that is trying to break out. After the bear market run through 2015 price is now testing the key $80 level.

I note that momentum has rested back to the Zero-line for the first time in this ETF's existence which is often an indication of a powerful coiled spring.

Should prices clear this $80 resistance I think a test of the prior highs at $100 would be an easy target and would be looking for substantially higher prices from there.

This group is showing very strong EPS projections going forward and I want to be a buyer on new opportunities that arise over the next few quarters. 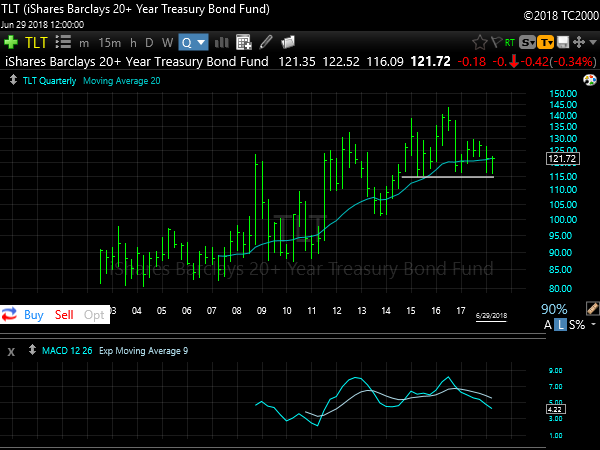 Treasury Bonds continue to look like a top to me and this long-term perspective shows that structure.

There is a clear Head/Shoulder Top pattern (trust me, when you can see a Head/Shoulder pattern on a quarterly chart, its a BIG pattern). Momentum is dragging downward and looking poor.

This is a big picture thesis I have and will continue to reference this chart to see if it continues to play out. 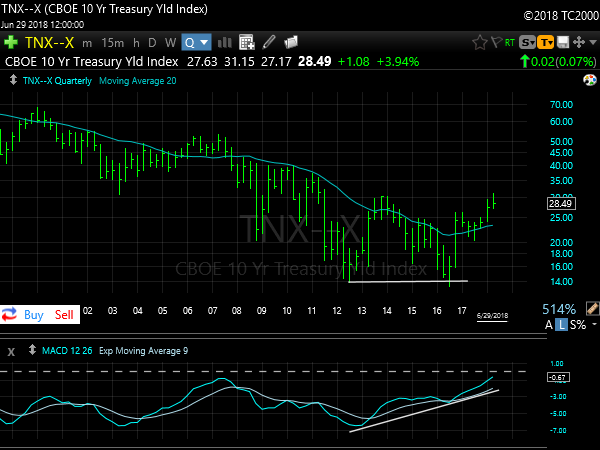 The 10-Year Treasury Yield appears to have formed a successful Double Bottom pattern. Note the momentum divergence on the recent 2016 low, a very powerful shift in momentum is occurring and price is responding.

Remember this is a big picture view and concerns itself very little with the weekly squabbles on CNBC about any particular level on the 10-Year.

Long-term it is clearly the case that Yields have bottomed and I will stick by that thinking until something changes on this timeframe. I don't give a crap is the 10-year goes to 3% and then back to 2.5%, it matters not to this thesis. 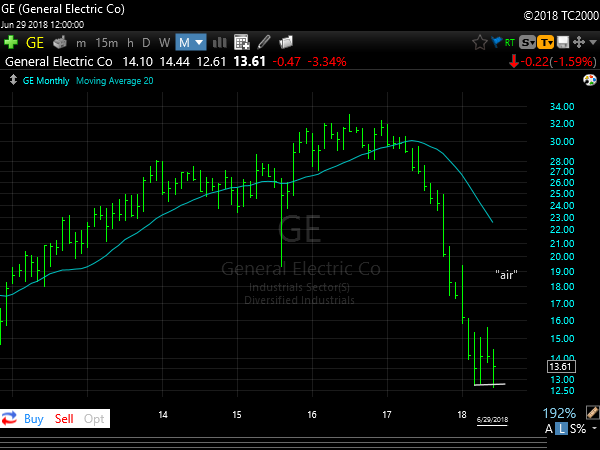 This is strictly a speculative "value" type play and not my normal strategy, but I can't help notice what has occurred on the Monthly chart to close June.

Price has obviously poured over like a waterfall in the past 18-months; this thing is a total dog, you can't even trust the dividend any more. But what I am seeing here is at the very least interesting.

I notice how price clipped the lows from March and April and then recovered swiftly to close well back above that level. I'm not trying to call THE bottom in GE but the risk/reward is appealing for at least a mean reversion trade.

Prices don't trade in straight lines forever, they always revert to the larger trend average eventually. Currently price is 66% below the 20 Month SMA. For a lumbering mega-cap like GE that is an unsustainable discrepancy. So either this thing is going absolutely to zero or will recover at some point soon.

The way I see GE is this: We have a confirmed Monthly reversal of the prior lows, I will place a stop at the June low and see if this can retrace to the 20 Month SMA. If assuming it takes about a year for this to play out I would expect the 20 Month line to come down a couple dollars from its current levels and be around $20ish. That gives at least a 6-1 reward to risk.

I like to take long-term speculative trades when the opportunity is right and I think there is opportunity here. 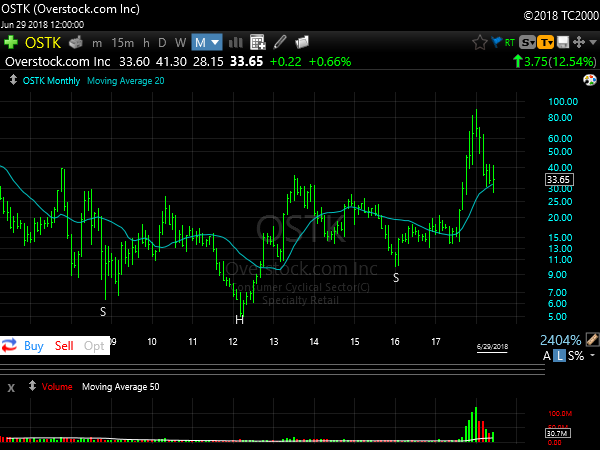 OSTK is a very wild trader, so this is a highly speculative trade idea as well. The price structure is interesting here. For a decade this stock has built out a large Inverse Head/Shoulder base pattern. Over the past year we have seen price explode higher out of that pattern to new all-time highs on monster trading volume.

Since that breakout price has retraced back to test the rising 20 Month SMA and prior highs of the range. Also note that in June the stock broke below the prior 2 monthly lows and the 20 Month SMA only to recover those levels prior to the close of the month. This looks like a decent shakeout and the stock could be ready to resume higher.

If this is a Bull Flag pattern (which I think it is) then we would expect prices to retest the prior highs near $90 (nearly 200% from current levels) and then eventually resume to new highs and extend much further.

I want to be looking for opportunities in this name as long as price is above the June lows. This thesis will gain much more momentum if price can clear the 3 monthly highs sitting near $41.50.