We are now 6-weeks into this trade and its been nothing short of fantastic. Almost all of my initial hopes have been achieved. Honestly I thought I'd be writing this update in a year or so, not less than 2-months from positing.

Now that nearly all the upside gaps from 3/6 are filled I am cooling off on the thesis somewhat, or rather moving onto phase 2. The speed of which this recovery has occurred is causing me to dial back some exposure and I am working toward free-roll position sizes.

For the last two weeks I've been slowly trimming off small amounts of these trades.

I am looking to take my size down by about another 1/3 over the next month if prices cooperate. The remaining amount I plan on holding more or less forever and only make very small adjustments over time to the positions. Many of these pay decent dividends, so I would like to sit back and bring that in over time.

We all know Energy has been the worst performing sector group for the last several years. 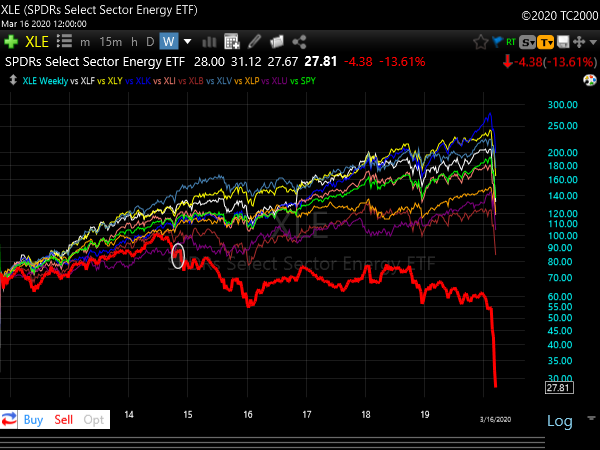 Energy hasn't just been the worst performing sector, its been notably disastrous, especially in the last 2-years (declining -65% since 2018). This recent correction followed the first leg down beginning in 2014 (a decline of -50%). Between these two significant corrections this group has lost -73% of its value over the last 5+ years' Bear Market.

The recent meltdown phase is being aided by the plunge in Oil prices after OPEC could not reach a production-cut deal. Russia and Saudi Arabia are at an impasse and prices are tanking. I have to think we are headed back higher sooner rather than later as political pressure will begin if the market cannot stabilize. If OPEC can strike some kind of deal, Crude will be back at $50 really quickly. If they cannot strike a deal and the current Bear Market environment continues, we will likely see a lot of bankruptcies among our domestic producers.

Okay so that covers the obvious, all of this stuff is well known by market participants, investment managers, and Mr Market. Lets look at some things that aren't so obvious taking place under the surface:

The vast majority of the stocks in the E&P sector are being priced as though they are going bankrupt, and I think many of them likely will. However I also think that the ones that survive and do not go bankrupt could be offering a generational value opportunity.

Most all of these companies are boasting a Price/Book Value of between 0.50-0.15. A Book Value of 1 suggests the stock is trading right at its base value of Assets - Liabilities. When the market values a company's growth and future prospects positively, the stock will generally trade well above a P/B of 1. When the market values a company's future prospects as poor or in distress, the P/B ratio will plummet below 1. This is where we find the majority of these companies right now.

The question I have is: If Energy isn't completely done as an investment thesis, which companies that are being priced for bankruptcy are likely to survive and reverse their trends?

There are two things I am noticing between those names that are likely to survive and those that are not: The first is Debt to Equity, and the second is Sales.

The big dogs like CVX, XOM, RDS.A, EOG, CXO, etc are the most insulated from bankruptcy as their Debt/Equity ratios are fairly benign. However those are the few that boast this kind of protection. Most everything else I am seeing are showing Debt/Equity > 0.50. So if we want to play it safe in this space those five above are likely some of the better prospects. The "safest" plays however are not going to give us those maximum returns. In order to get the lotto ticket type returns I am looking for in this group I want to find some of the names that are priced for bankruptcy but have a better chance of surviving.

This is where checking in on the Sales trends might help. Sales trends seem to be a separating factor when skimming through the rubble. It appears to me that about half of the E&P companies have Sales near their all-time highs and the other half are steadily lower and some at the all-time lows.

I want to avoid those that are struggling to sell their products and focus on those that seem to be conducting solid business despite this brutal environment.

A few that stand out to me right away, showing bare bottom prices plus strong Sales trends are COG, FANG, RRC, MR, MTDR. The other item of note with these names is that they are also showing notable Insider Buying over the last few weeks. 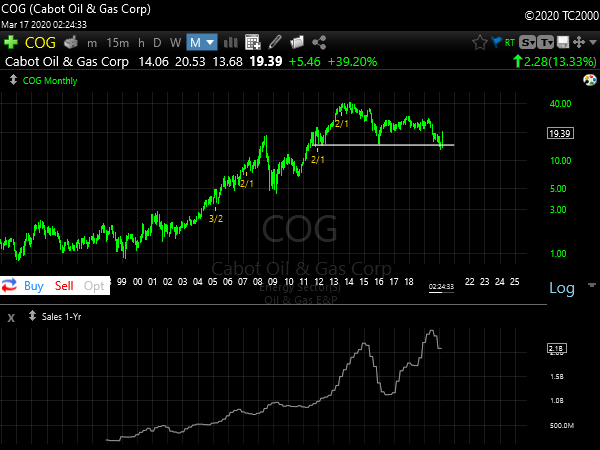 COG is one of the few with a slightly elevated Debt/Equity that has not been priced for Bankruptcy. Sales are strong and prices are actually in a Bullish Monthly Reversal pattern with less than two weeks to go in March. We saw Insiders purchase the stock back in August near $16 per share and now prices are well above those levels. This is a strong position and nearing the upper echelon group mentioned above. 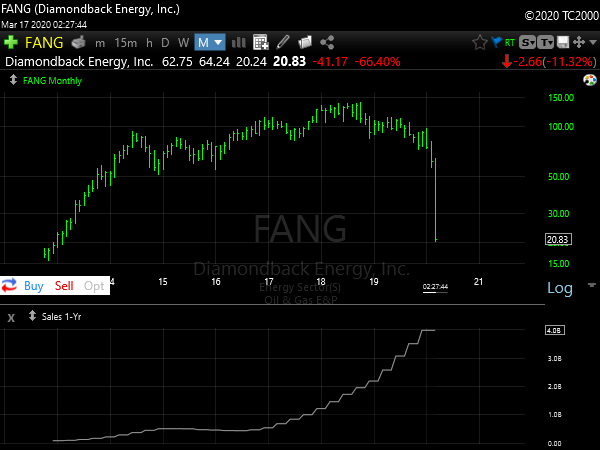 FANG is nearly back to its IPO levels and yet Sales are pegged against the all-time highs. This is a name I have been Long in the past and was finally Stopped out near the $90 level in 2019. Seeing this back near $20 per share is appealing to me to start legging in. The CEO stepped in and bought 17,000 shares on March 10th as well. 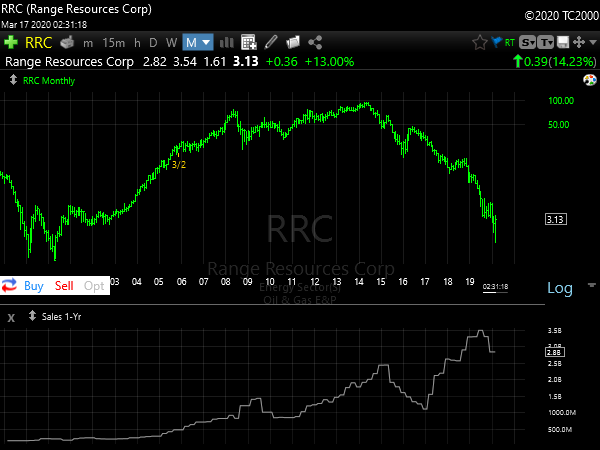 RRC is back to test the lows from the late 1990's while Sales sit near all-time highs. In 2000 Sales were below $500M, currently Sales are at $2.8B. There remains some potential here for improvement in share prices. Insiders are stepping in and have been peppering the stock near $2/share. One of their directors purchased 900,000 shares on March 10th. That's a $2M purchase! I realize this doesn't guarantee a bottom or financial stability for a company, but it is notable that this Exec feels there is enough value and potential here to drop a couple million of his own dollars. 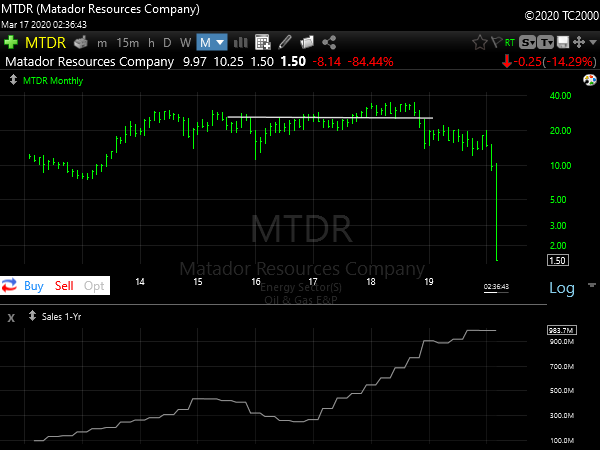 MTDR is another that I liked in 2017-2018. We were Long for our accounts as it looked to be breaking out to new all-time highs. We were Stopped out in November 2018 at $22.80/share and have since seen prices tumble more than 90% from that exit. This action looks like major trouble for the company yet Insiders are going crazy buying the stock over the last two weeks. Since March 9th 530,000 shares have been purchased. The CEO bought 240,000 of those on March 13th at $2/share.

Again none of this buying proves its safe, but it is notable to see these people with the most intimate knowledge of the company and business put their own money on the line here. Since I closed positions near $23, I think its worth throwing a little back in near $1.50 here and checking back in a few years. 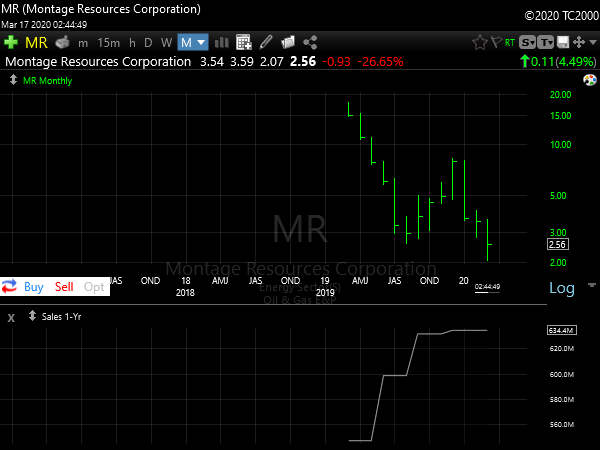 MR was previously known as Eclipse Resources and changed the name in Montage in 2019. Since that change the stock has been pummeled. I like however how price is holding near the prior swing low and Sales are at recent highs. There is no Insider Buying to note here, yet EPS growth projections seem decent at this time to warrant a little deeper look.

For my personal accounts I am adding all of these names at this time for a portion of my long-term allocations. I am allocating roughly 10% of my account to this idea and spreading the risk accordingly. I do fully expect half of these picks to go bankrupt and am planning my risk to account for that. I feel more confident with COG, FANG, and RRC so I am allocating a higher percentage of my funds toward those and a lesser percentage toward MTDR and MR.

I also have been purchasing CVX and RDS.A for long-term dividend accounts on the recent plunge. I will look to continue to average my cost into these two larger companies provided they do not completely fall apart going forward.

I have added speculative position sizes of RRC and FANG to our most aggressive Client Accounts and will look to be opportunistic if they do in fact improve going forward.

I do not intend this thesis to be a short-term trade. I am planning on hunkering down with these select positions and letting them do their thing. I feel that there is a deep-value opportunity unmatched since Banks during the Financial Crisis in 2009. As an example of this lets take a quick look at BAC in the heart of the 2009 meltdown period. 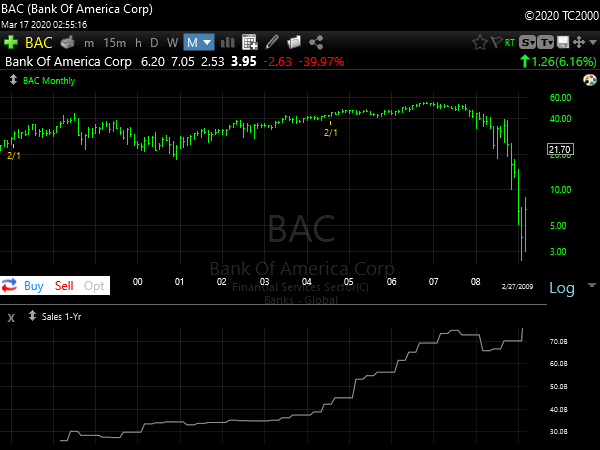 The waterfall collapse looks eerily similar to many of the Oil companies we are comparing. BAC's stock went from a high near $60 and fell below $3 over the course of a couple years. Note that Sales were near all-time highs when prices hit their lows showing a solid business backdrop despite the panic and looming bankruptcies that were coming into the Financial sector.

I'm not saying these are the same because obviously there was government intervention that came into the Banks. I do not know what will happen in the Energy sector with regard to bailouts. But I am mostly just pointing out how we have seen these kind of collapses before and while some companies went bankrupt then, many or most survived and now are thriving.

There are no guarantees when it comes to investing in the market, especially so when the companies in question are looking to be overflowing with unsustainable debt. But I feel as long as our allocations are set to a point where catastrophic losses in the companies themselves do not implode our accounts, it is worth a lotto ticket purchase at this time.

We have not been destroyed by this Oil crunch and this is a very important distinction for us stepping in here. Sitting on the sideways watching this carnage and not suffering losses has allowed us to observe with a clear head. We are operating from a position of strength and have the capital to take a few swings for the fences now that reluctant Longs have been puking positions over the last year or more.

Value investors always like to say "buy when there is blood in the streets", I get the sense we are really really close to that moment in the Energy sector.

I can be reached on StockTwits and Twitter @ZenTrends. I manage Client Investments at Freeman Capital Management and offer Educational/Trading Services at zentrendstrading.com