WWE (World Wrestling Entertainment) has come across my screens again recently. After taking a quick trade post-Covid, I moved on from the name with a chuckle and a solid ring of the register.

Professional Wrestling is a difficult entertainment to take seriously. About as seriously as I've ever taken it is while playing drinking games based on which bizarre events would unfold at WrestleMania.

But a look a little deeper into the business of rassling shows a very promising picture in my view.

Profits and Sales are at record highs.

Total Equity is at all-time highs.

Forward EPS estimates project to be solid double digits for the forseeable future.

The fact that it is taken as more of a joke than a strong growth stock is likely because of the nature of the business itself. But pro wrestling bias aside, the company is making money and growing solidly.

I am trying to look at this from an objective point of view. My scan popped the opportunity, the chart passed my "eye" test, Fundamental metrics are what I consider very strong and ideal for continued growth, I've recently come off a successful trade prior in the name, and its an under-loved stock because of the silly nature of its product. 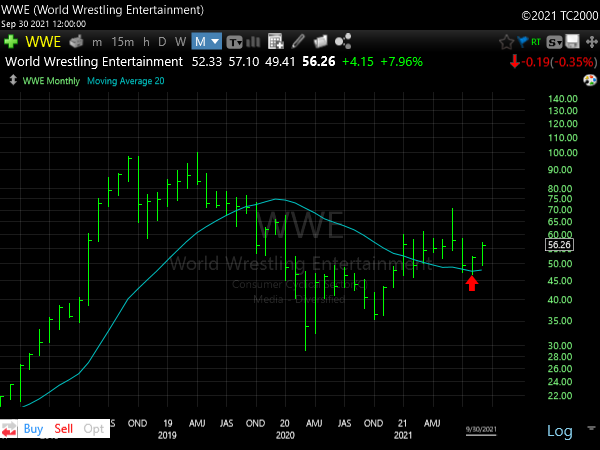 This rotation up gives us a confirmed swing low to trade against for a strong risk/reward. With Fundamental metrics at record highs this looks like a value entry for the stock trading -45% off the all-time high price. 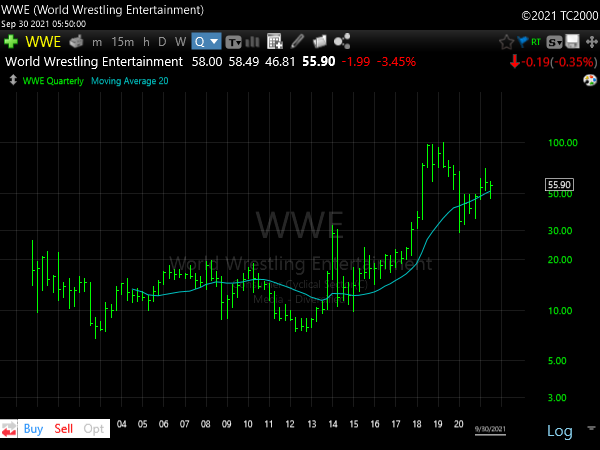 Despite the stock being relatively weak over the last few years which might put some traders off, zooming out shows the larger performance and the trend that is in place.

Since the IPO the stock traded higher by +500% into the 2018 highs and was more than an +1100% return from the 2012 lows to the 2018 highs. The most recent correction has simply been a digestion of that prior huge rally.

From my view the stock has a good chance of resuming higher after a lengthy reset. Based on the Monthly timeframe we can take a relatively tight Stop and see what happens.