A lesson of base breakouts can be seen here in XLE: Very often areas of prior rejection will act as strong resistance (sellers exist at these levels). The range will continue until the sellers are worked off and they lose control of the level.

Ideally what we see in these cases when the sellers begin to lose control is when prices no longer reject hard from the resistance. but instead "hang out" near the highs and consolidate tightly.

This behavior exists on all timeframes, it is fractal and can be applied over and over again. Here is XLE, prior tests have been rejected strongly. Now we need to see something like I have drawn where price no longer sells off hard but rather just churns near the highs. 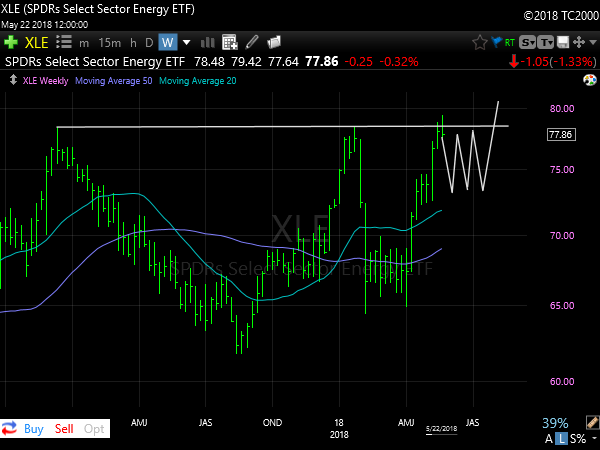 Lasting breakouts tend to occur from these formations as the selling pressure no longer can hold and the buyers stampede through. Most of the time though a sharp and extended test (as we just saw) will not have the spring to hold a breakout. It needs to build again, then run.

We will be watching XLE going forward to see how the sell pressure is handled. Does it just tank back to the lows or does it make a more shallow dip this time followed by another test of the high? These are the clues we watch for all the time.

Scanning and Building a Watchlist